During the Reign of East India Company, the Court at Hisar came into being around 1832. It was then affiliated to ‘Allahabad High Court‘. Subsequently, it had a District Court which used to deal with three kinds of cases Civil, Criminal, and Revenue. For civil and criminal jurisdiction, the Hisar District court was initially in the ‘Ferozepur Sessions Division‘ and The Divisional and Sessions Judge, Ferozepur visited the district 3 or 4 times a year to hear cases committed for trial and to inspect civil and Criminal Courts of the District, and it was only in 1915 when the Hisar Court was upgraded as a Sessions Division, and the court of District & Sessions Judge was duly located at Hisar. Earlier the jurisdiction of Hisar Sessions Division was far and wide which included Fatehabad, Sirsa, Bhiwani Districts, and also Gurgoan, (now known as Gurugram) was under the Hisar Sessions Division up to 1950. District & Sessions Judge, Hisar, used to visit Gurgaon for the disposal of Civil and Criminal work as an appellate court. In 1950, the District Gurgaon (now Gurugram) was transferred from Hisar Sessions Division to Karnal Sessions Division. With the passage of time Sessions, Division was set up at Bhiwani, Sirsa, and Fatehabad. However, it is added here that the Court of Senior Sub Judge was established probably in 1910.

After the separation of judiciary from the executive on 2nd October 1964, the Additional District Magistrates were designated as Chief Judicial Magistrates and ‘Shri R.R.Dhir’ was the first Chief Judicial Magistrate at Hisar, as per record. From the file of Sessions case titled ‘The Crown Versus Ram Karan etc.’, u/s 302 read with section 149 IPC, decided on 18 October 1924, it is revealed that Shri H.B.Anderson was Sessions Judge at that time. The old building of Hisar District Courts was established at Hisar Delhi-Road probably in the middle of the 1830s, during the reign of East India Company. The entire area on which the court buildings were located has since been converted into a commercial complex by the HUDA authorities. After a long span of 140 years, it was shifted on 18.12.1973 to the present judicial complex situated on Rajgarh Road. The Foundation of the present building was laid by Shri Bansi Lal Chief Minister on 17 October 1971. 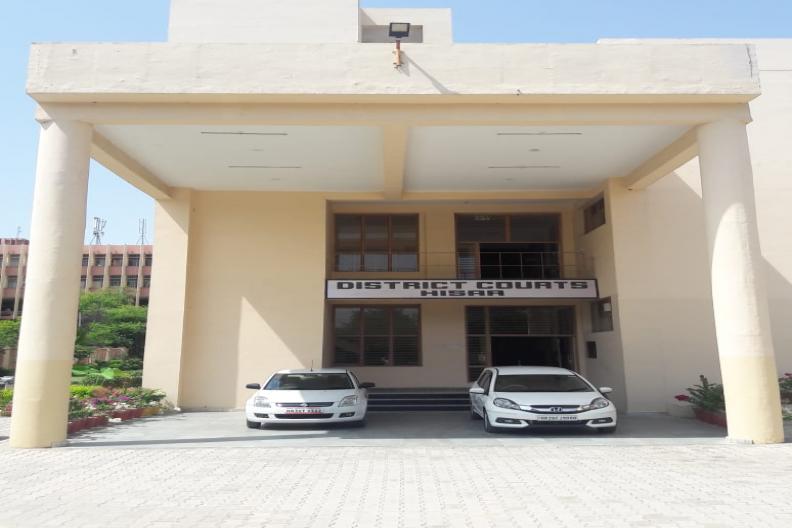 The court at Hisar came into being around 1832, but as far as the history of its Bar Association concerned, it probably started in 1870. The bar is 148 years old. The Hisar Bar has a glorious past. The Punjab Kesri Lala Lajpat Rai had been its leading member for six years from 1886 to 1892. Apart from Lala Lajpat Rai, the name of Pt. Madan Mohan Malaviya was also associated with the Hisar Bar.

Sub Division Court, Hansi: The Hisar Sessions Division is headed by learned District & Sessions Judge, Hisar, and presently it is having one sub Division namely Hansi. It is located at a distance of 26 kilometers (16 mi) east of Hisar on NH-9. It appears that at one time Hansi was larger, more prosperous, and more important than Hisar. The town has several important buildings of archeological importance. The city of Hansi has five gates of entry – Delhi Gate (East), Hisar Gate (West), Gosain Gate (North-west), Barsi Gate(South), and Umra Gate (Southwest). Another prominent feature of this ancient city is its fort. The fort is said to be that of Great King Prithvi Raj Chauhan. 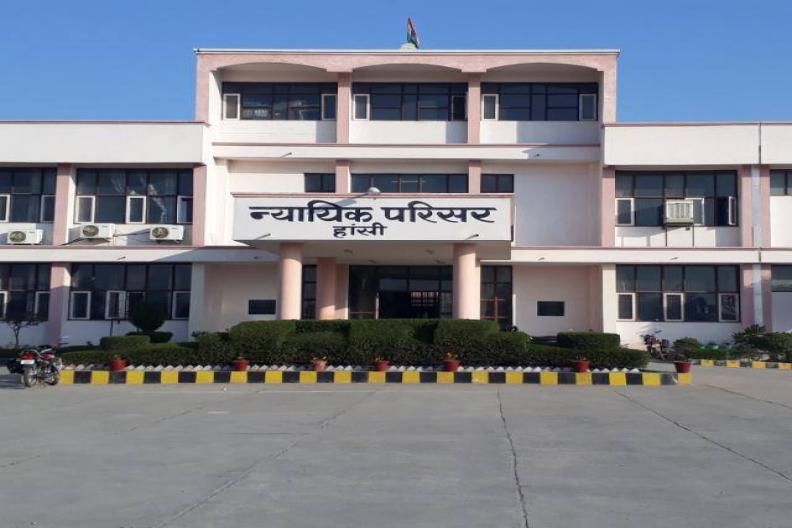 During the period of Firoz Shan Tuglaq, an underground tunnel was constructed connecting the present Hansi to Hisar. The entry gate of the fort was built by George Thomas.
The judicial court in Hansi was established after the year 1956 consequent upon separation of judiciary and executive. The first presiding officer of Hansi was Sardar Harnam Singh. He took over the judicial court, Hansi, sometime in the year 1963 and remained there till 1st Nov. 1966, when the Punjab and Haryana states were formed under the re-origination of States Act. Later on in the year, 1970 two judicial courts were established at Hansi, which were started working in the old court complex behind the PWD office.
The present new judicial complex situated on Jind-Delhi Bye-Pass, and the foundation stone of Sub Divisional/Judicial Complex, Hansi, was laid by Hon’ble Mr. Justice Vijender Jain, Chief Justice of Punjab & Haryana High Court, Chandigarh on 6, March 2008 and Judicial Court Complex, Hansi, was Inaugurated by Hon’ble Mr. Justice Satish Kumar Mittal, Judge, Punjab and Haryana High Court, Chandigarh and Hon’ble Mr. Justice Ajay Kumar Mittal, Administrative Judge, Hisar Sessions Division On 02.04.2011. At present four Judicial Courts are working in sub-division Hansi, out of which one court is of SDJM and three courts are of JMIC.

When it comes to the selection process, the candidates have to take up a written exam / Interview. Selected candidates will be paid a handsome salary (as per Govt rules). The type of questions that are asked in the technical interview round differs from one position to another. There are multiple steps for the selection process for the posts of Stenographer, Clerk, Peon, Process Server, Gardner, Chowkidar, Liftman, Sweeper, Watchman, Chauffeur, Cook, etc. in the Hisar Court. The procedure is as follows

We advise to you for other Hisar Court Recruitment 2021 and selection process please read below official recruitment notification carefully before apply.

Know the current status of your case by Return SMS

Important: Case Number Record (CNR) is a unique Identity Number of each case, which remains constant. All the Advocates, Litigants, and stakeholders are requested to ascertain the CNR of their respective cases from the concerned Courts and to refer the same for all future references.